St. Petersburg native Anatol Woolf received his early art training at the Special School of the Academy of Arts in St. Petersburg, Russia. He later attended the St. Petersburg Institute of Theater, Music and Cinematography, where he specialized in set design. In Russia, Woolf designed sets for various theaters and was an illustrator for St. Petersburg Textbook Publishers, as well as a freelance illustrator.

Since coming to America in 1987, Woolf has been working as a freelance illustrator, designer, and art teacher. He has also widely exhibited his paintings in the United States and Europe. His works have appeared in the Washington Post, the Washington Times, National Geographic Traveler, Policy Review, Teacher, Legal Times, Chronicles, Spider, and Cricket Magazine. He has also illustrated books for Kendall/Hunt Publishing Company and Llewellyn Publications. Woolf's work incorporates a variety of media including watercolor, pen and ink, colored pencils, oil, and acrylic. 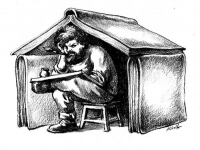 Browse the unique items that Anatol Woolf creates, and discover the perfect gift!